Richmond Hill Cricket Club (RHCC) defeated American Cricket Society (ACS) by seven wickets in a nerve wrecking battle last Sunday at the famous Baisley Park (Cage), in the final of the Eastern American Cricket Association’s T20 Blitz competition. As the EACA drew the curtains on the 2013 season it was all topsy-turvy in this fina. Both sides panicked in front of a huge crowd; with ACS off to a great start, but their middle order failed to capitalize, destroyed by the veteran off-spinner Ramphal Bactowar. An opening stand of 85 off 13.1 overs which included 44 dot balls, between Sudesh Dhaniram and Wahid Ward, chasing a somewhat modest target at a required rate of just above a run a ball, kept everyone pondering what was going to happen next. In the process setting up the game for an exciting finish. However, RHCC’s, Debo “Sachin” Sankar provided resolute anchor role in the last couple of matches and continued his coherent form, to ensure that RHCC prevailed as he and Deryck McDonald picked-off 28 from just 20 balls for victory. 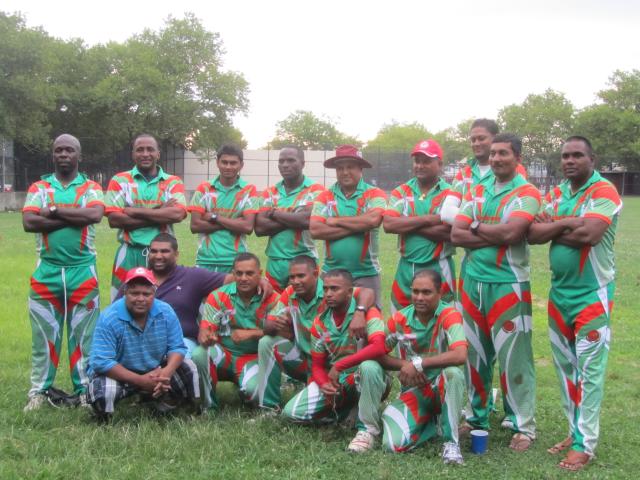 Sent in to bat after losing the toss, openers Tamesh Balwant 43 (24) balls and Steve Nowrangilall 39 (20) balls, set ACS off to a flying start.  The pair bludgeoned 62 from 31 deliveries as RHCC opening bowlers Kevin Darlington and Deryck McDonald were clobbered around the park. Their four overs with the new ball leaked 53 with Nowrangilall hammering McDonald’s second over for two fours and a six. Then Balwant took seven off Darlington, before he smoked Shameer Sadloo for 17 in his first 5 balls. But Balwant mistimed a low full toss, bowled from behind the popping crease, as he lobbed straight into the waiting bucket of Ronald Evelyn fielding at long off. Ramphal Bactowar, bowling from the Basketball Court End (N) then became the bowling demon as RHCC sent chaos into the ACS camp. He first flattened Steve Nowrangilall stumps then had Karan Ganesh 6 leg before, playing down the wrong line, Amjad Khan 2 swept straight to Darlington fielding at deep backward square, who did not had to move an inch and Tryon Forde 9 trapped in front. ACS slumped to 112 for 6 by the 14th over.

It was the veteran Zamin Amin batting at number 7, stuck around and was the only other ACS batsman to record double digit 19 from 17 balls as S. Sadloo, Dhaniram and Kumar Nandalall cleaned up the tail. Terry Hastoo duck, Aun Merchant 9 and Ralph Ogle nought were all back in their comfy chair watching Saheed Amin unbeaten on zero, fir a championship total of 144 all out in 19.3 overs. Scorecard by Lenny Achaibar

RHCC’s Ramphal Bactowar spun a web around ACS with his prolific leg spins, for returns of 4-0-11-4

With just over a run a ball for victory, it appeared the game would be finished by the 15th over with RHCC’s power-house lineup led by Sudesh  Dhaniram and Wahid Ward. However, it was not what the huge crowd expected, with Wahid Ward coming off a blazing unbeaten century the previous week and Dhaniram known for his exuberant batting display. The duo took a contrasting approach as they milked the bowling and took advantage of any wayward bad deliveries. The first 4 overs yielded 33 runs with Dhaniran mowing Ganesh’s second over for 12, which include three boundaries.

Zamin Amin was introduced from the Foch Boulevard End (S) and immediately began to extract some turn and bound, sending both openers into defensive mode. His four overs would yield a miserly 8 runs with a maiden, an outstanding bowling performance defending 144. RHCC panicked momentarily with the run rate climbing and the scorecard read 57 without loss in 11 overs, with a futher 87 required from 48 balls. Wahid Ward then smoked two sixes off A.Merchant in the 13th over, while Dhaniram stroked seven in the 14th over, bowled by Ganesh, for Ward to thump the final delivery into the crowd. 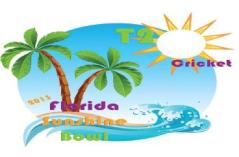 Trayon Forde was introduced and immediately dismissed Sudesh Dhaniram for 47 (7x4s, 1×6) 41 balls and Wahid Ward 42 (5x6s) 45 balls. With 33 required form 24 balls, Debo Sankar then strode to the wicket and immediately began to mow down the required target with every ball he faced, Shameer Sadloo (1) was run out going for a double as he was sent back by Debo. RHCC eager to make amend following their two runners up finishes in as many EACA championships. With a further 31 required from 18 balls they needed a big over to bring back the game within their reach. That over would be the 18th, which was bludgeoned for 25, Debo.  He deposited the first ball into the crowd then followed up that with a glorious cover drive that rocketed to the fence, McDonald then got into the act with two scorching boundaries through mid-off that raced towards the boundary. The catalytic over which illustrated as 6,4,1,4,4,2 proved that RHCC had matured following ACS’s 2012 EACA T20 Blitz Triumph and Big Apple’s 2013 Power 40 Title.

Karan Ganesh took the ball with seven needed from 12 balls. It was all over for ACS as the duo nudged around singles with Debo handing the final rites to ACS with a double through backward-point as the RHCC players and supporters invaded the field, celebrating wildly with high-fives. Debo Sankar 34 (3×4, 1×6) from 19 balls and Deryck Mcdonald 12 (2×4) from 7 balls remained unbeaten.