West Indies PCL Team of Round 8

West Indies Professional Cricket League Team of the Round – 8 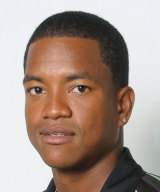 Leon Johnson struck his second hundred of the season and the only century of the round, 107 to lead the Guyana Jaguars to victory over Jamaica Scorpions. Johnson is the second top scorer this season and is one who is pressing for a Test team recall when India arrives in the summer. Johnson has appearrf in the Team on the round on three previous occasions this season.

Kraigg Brathwaite scored 66 and 37 as Barbados Pride got the better of the Winward Islands Volcanoes. Brathwaite an incumbent on the West Indian Team has been doing his bit to retain his place. This is Brathwaite’s fourth appearance on the Team of the round and he sits fifth among the season’s leading run scorers.

Devon Smith appetite for runs does not seem to be waning with age. The Grenadian opener posted two fifties, 87 and 51 for the Volcanoes against the Pride and is the leading scorer for his side. Smith is tenth on the run scoring charts, but faces stiff competition if he is to gain a recall in the twilight of his career. This is Smith second and consecutive appearance on the Team of the Round.

Imran Khan who started his First Class career as a Batting All-rounder, but has been consistent of late mainly with his Leg Spin bowling, showed that he still have the tenacity to score runs. Promoted to open the batting a position he is familiar with especially in the dawn of his career, Khan scored 82 to add to his six wickets as he led the Trinidad and Tobago Red Force over the Leeward Islands Hurricanes. Khan is the third best bowler this season with 37 wickets and has previously appeared on the Team on the round once .

Roston Chase is making his fourth appearance on the Team of the Round on the back of 53 and an unbeaten 35 in Pride’s win over the Hurricanes. Chase is the third best batsman this term with 584 runs. His name should come up for consideration when the selector sit ahead of the India tour.

Narsingh Deonarine scored 68 for the Red Force over the Hurricanes which lifted him to his third appearance on the Team of the round. Deonarine has scored 384 run this campaign and sits twelfth on the batting charts.

Rakheem Cornwall had made the Team of the round in the past for mainly his bowling, but so too for his batting. This round Cornwall went one better displaying both his batting a bowling capabilities, scoring 31 and 65 as well as scalping five wickets. Cornwall has scored 328 run (16th) and taken 37 wickets to be the second best bowler in the league.

Justin Greaves makes his debut on the team of the round on the back of his five wicket haul against the Scorpions. Greaves in one of three Fast bowlers to make the team this round, the most by the Quicks for the Team of the Round this season.

Nikita Miller has been an unstoppable force this season featuring in six of eight Team of the rounds this term. Miller’s consistency has been sublime of late starring in all of the last five rounds. Miller is twenty plus wickets ahead of Cornwall in second with 58 scalps. If there was a time for Miller to have his chance it would be no other time than this season.

Ronsford Beaton completes the pace bowling trio for the Team of the round as he too makes his first appearance to the Team . His five wicket burst stunned the Hurricanes. Beaton is the sixth best quick this campaign with 15 wickets.