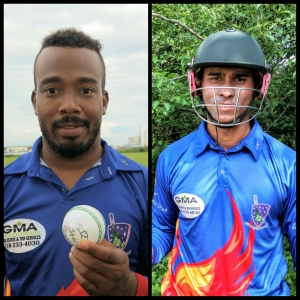 Liberty Sports Club top performers Andre Kirton and Francis Mendonca, both of whom are featured at the top of the 2016 Easter American Cricket Assocation leader-boards, will be participating in this week’s USA Cricket Combines. The LSC duo were both invited to the New York stage of the combines for the four day event which seeks to identify USA talent.

Francis Mendonca a prolific wicket keeper batsman is currently in second place in the list of leading runs scorer in the competitive EACA. Mendonca’s 153 runs after four innings is worth it’s weight in gold given the tough batting conditions due to weather affected pitches for all four of the innings. Complementing his batting exploits Mendonca has been exceptional behind the stumps with a league leading 5 wicket-keeping dismissals.

Mendonca joined LSC in 2014 and was instrumental to helping the club to it’s first semi-final appearance in the EACA that same year and a championship in 2015. A summary of Mendonca’s cricketing exploits can be found on LSC’s webpage at http://libertysportsclub.org/player-profiles/francis-mendonca/

All-rounder Andre Kirton has been on top of his game in 2016. He currently sits at the top of the bowling list in the EACA with 10 wickets at an outstanding 7.4 runs apiece and an economical rate of 2.86 runs per over. Kirton’s returns with the ball was equally supplemented by his performance at the other end of the wicket. In four appearances at the crease Kirton racked up 104 runs with two uneaten innings allowing him an average of 52 per inning.

Kirton joined LSC in 2015 and was key to proving the additional impetus needed to get the club to it’s first 40-Overs Championship that same year. He was also a critical part of the club’s T20 unit which competed in the league’s final . A summary of Kirton’s cricketing exploits can be found on LSC’s webpage at http://libertysportsclub.org/player-profiles/andre-kirton/

The management and players of Liberty Spots Club would like to wish Andre Kirton and Francis Mendonca the best of luck and pledges their full support as they set out to display their skills for the coaches at the USA Cricket Combines.

This entry was posted in Headlines. Bookmark the permalink.