Posted on October 1, 2013 by vellocricket

A jaunty finish from Sudesh Dhaniram in the final over that went for 24 runs, bowled by Ryan Girdhary—in the final over, set up a 37-run victory for Richmond Hill Cricket Club (RHCC) over Atlantis Cricket Club-NY (ACC) last Sunday at Baisley Park (Cage) located in Queens, NY. Dhaniram walloped eleven sixes and ten fours; in a 49-ball maraud that brought him, a record 6th century for the season in the Eastern American Cricket Association (EACA), (130 not out). Dhaniram was very watchful — early in his innings and bore down on all of the Atlantis bowlers, that were pillaged for 40-plus runs in their allotted 4 overs with the exception of Dwayne Hurley and Greg Robinson, who gave away 24 from 4 overs and 10 from 1 over respectively, and in the process catapulted RHCC into the EACA Blitz T20 semi-finals. 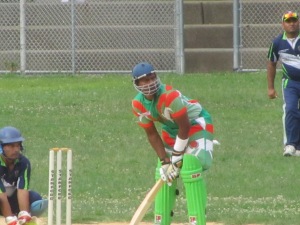 Richmond Hill quickly, learnt their lesson from the defeat to Liberty Cricket Club — RHCC appeared energized and more confident in this weekend clash with Atlantis and did what they set out to do — deny Atlantis a victory for the third time this season. Inserted to bat first after losing the toss, RHCC lost Zaheer Sadloo (7) to a stunning catch by Ryan Girdhary, fielding at point, diving full stretch to his left with the scorecard on 14.

However, Dhaniram found a use full partner in Debo Sankar, coming in at number 3. The duo plunder a 2nd- wicket partnership of 93 from 50 balls with Dhaniram—engaging in annihilation mode with scintillating stroke-play; balls flying out of the park and missing vehicular traffic by inches; houses struck by white missiles; spectators ducking for cover—while Debo would interject periodically, Smoking anything short to the fence in his 43 from 27 balls that included four boundaries and two well executed maximums before he departed with the score on 115.

Shameer Sadloo (3) lasted only 5 balls, being bowled by Alex Amsterdam, second week in a row, attempting an ambitious big hit. Wahid Ward struck a brisk 14 from 6 balls with a four and six, but lost his stumps to Dwayne Hurley with the score on 147. Kumar Nandalall was run out for 17 with 2 sixes and a solitary boundary from 4 balls while Dhaniram provided the final flourish to the RHCC innings of 228 for 5 from their 20 overs with 4,4,4,4,and 6 off R. Girdhary and returned to the pavilion to a standing ovation with a stroke-filled 130 not out.

Atlantis threatened to chase down Richmond Hill’s 228 for 5 at A asking rate of 11.4 per over, when their openers Ryan Girdhary and Shawn Mason hit 41 from the first 4 overs. Kaleem Bux then had Mason caught for 16 from 7 balls (1×4, 1×6). Alex Amsterdam joined Girdhary and pair saw the scorecard moved quickly to 112 from 38 balls with Girdhary repaying Dhaniram’s only over with two massive sixes. Amsterdam punished Bux for consecutive boundaries before Zaheer Sadloo had him caught for 33 from 20 balls (6x4s). Dhaniram run out K. Bridgepaul for 1 and Jason Greaves was caught off S.Sadloo for 7.

However, Girdhary continued the onslaught on the RHCC bowlers, keeping abreast with the required run rate or just below. He struck S.Sadloo for consecutive boundaries, but Shameer had the last laugh when Wahid Ward took a well-judged running catch to dismiss him for a swashbuckling 75 (7x4s, 4x6s) from a meager 32 deliveries, with the scorecard reading 132 for 4 in 11 overs. With a further 87 required from 54 balls, the rest of Atlantis batsmen lost their way soon after, and were never able to get themselves ahead of the required run rate. Ron Andrews was run out for 14 from 11 balls with a solitary six while Ryan Sukhdeo and Greg Robinson were unbeaten with 16 and 13 respectively when the 20 overs expired.