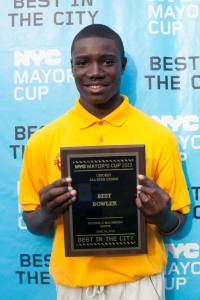 PSAL Cricket continues to be among the headlines, “PSAL” was invited to be part of ESPNCricinfo’s 20th anniversary Celebration held in New York on March 21st 2014. In attendance was none other than PSAL chief, Bassett Thompson. As PSAL enters the 2014 Season both students and administrators alike will be proud that the High School league continues to standout amid a fledgling cricketing atmosphere. ESPN has not been the only suitors of the PSAL but the nations governing body United States of America Cricket Association (USACA) and most significantly the International Cricket Council (ICC) are well aware of the value and the role PSAL plays in the development of cricket in America.

This Season opens with two matches on April 1st with Springfield Gardens hosting Queens H.S. of Teaching at Baisley South and then the clashes of the rookies with Maspeth tackling Newton at Baisley Cage. Action continues on Wednesday and Thursday with Two-time defending champions Long Island City facing off against arch-rivals John Adams. See full week 1 schedule below: