American Cricketer Nadia Gruny on Cricket in her Country 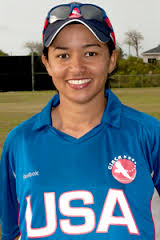 Both International Cricket Council (ICC) Americas and United States of America Cricket Association (USACA) has rekindled interest in American Womens cricket what do you make of these strides?

These are definitely positive steps for women’s cricket. The benefits are endless not just for women’s cricket but for cricket in general in America. I think all parties involved believe that the women have the better chance of making it to the World Cup before the men and with that success, it can create greater visibility for cricket as a participant sport across the nation. We have a lot of ground to make up because having not played in ICC competition since 2012, many other teams have leaped forward in terms of their performance level. That being said, a strong setup for women’s cricket now could yield very strong results in five years time.

You were at the Marylebone Cricket Club (MCC) matches in Philadelphia and the USA National Championship in Florida how do you compare and contrast the two events?

Every tournament or outing is different. Both were great opportunities to play more cricket. In Philadelphia we were able to play as a USA XI whereas in Florida we played against each other. In Florida we played on the turf wicket in the stadium for each of our three games and in contrast to  Philadelphia where we played on matting. The nature of each competition was different but the outcomes were the same, i.e., the opportunity to play more cricket and help advance our games.

You have been to the World Cup in Bangladesh (2011) what was that experience like?

Overall, it was a fantastic experience. From a cricket perspective, it was extremely challenging and eye-opening. At the start of that tournament, I had about seven matches on turf wicket under my belt and had been playing hardball cricket for less than two years. In our pre-tournament training, a bird dropped a load on my hand. I thought it was good luck but realized it might have been quite the opposite. I made a few ducks and 27 runs in the game we won against Zimbabwe. That game was definitely the highlight of the tour. I joke about blaming the bird but I had an extremely bittersweet feeling about batting immediately after the tournament until I decided to channel that disappointment to work hard on my batting. It has been a slow, upward movement since then. Personally, it was life-changing and to this day, there’s nothing I would change about that trip. Every disappointment, success, and happy memory puts things into perspective for me and drives me.

What is your view on the ICC Americas decision to suspend the Americas Women’s program over the past four years?

There is a 12 page report documenting my analysis and implications of this decision. I was hoping that the development of the women’s game would not have lost four years but it is now behind us and there is no point dwelling on the past. It is better for everyone to be forward-looking.

No. The players who represented the USA gave their best given all circumstances. This was our first outing at this level so expectations should be realistic. The strongest possible team was not there but unfortunately, until our pool grows, this may always be the case.

The ICC has laid out preparation plans for our entry into the ICC Europe T20 World Cup Qualifier in August. The women will be joining the USA men in specialists camps in March and thereafter, every month there will be some type of camp or match opportunities for the women, until the Europe Qualifier in Netherlands or Scotland in August. The USA Cricket Association also has plans to help the women prepare for this competition. I think both sets of activities will supplement one another. It’s great to have ICC’s support again for the women’s game in our country.

You recently wrote a commentary in the Huffington Post imploring USACA and American Cricket Federation (ACF) to mend fences is there in your opinion a timeline for USA cricket to curve up?

We’re in a unique situation of building the ship while we are sailing it. I think the ICC has already created a 5-year timeline for USA Cricket’s goals. There’s only so much we can do given ICC’s international cricket calendar and qualifying tournaments and beyond that, we are also constrained by financial resources. USA Cricket is in need of some international success and I hope to see us begin to move the needle within the next five years.

How have you received the ICC Americas’ administration of US Cricket?

I believe support from any kindred organization should be welcomed as long as the values and goals are aligned. The situation is temporary and is a result of the circumstances. It’s great they’ve been able to inject financial resources into US cricket and I hope this is sustained.

USA has been given a wildcard entry into the European qualifiers how pleased are you with this development.

I’m very pleased with this development. Not only for the immediacy of its impact on the current USA team but because it signals a new era moving forward for ICC to continue to push women’s cricket in this country and hopefully the region.

There are a few women’s tournaments around Atlanta, New York also Legends in Pennsylvania/Delware how critical are theses competitions to the development of women’s cricket?

We’re still at a stage in the US where we do not play enough games annually so every tournament adds value to women cricketers. Both players and administrators get a chance to practice their skills, iterate, and improve.

Outside of these one off competitions how do you stay in the game prepared and ready for the next assignment?

Preparation is always an ongoing process so I always try to maintain a fitness base and then ramp up ahead of a tournament. In more optimistic days, I played local league cricket with men but stopped last year for various reasons but primarily because I could not justify the time commitment to play local cricket year-round when ICC did not give us an avenue to compete. With ICC’s announcement that USA women will get a shot in the Europe Qualifier, I will resume playing local men’s league cricket in January.

There are more women commentators coming through do you see yourself and one who can continues to contribute to the game beyond your playing days?

Most definitely. I most likely won’t go down the commentary route but I’m very eager to contribute off the field. As a matter of fact, the business side of cricket and playing cricket are equally appealing to me.

The proposed US constitution stipulates for player and women administrators would you consider one of these roles if the opportunity arises?

Certainly. As long as I have the capability, I’m always interested in contributing or adding value to the sport in any capacity. Whether it’s taking photos, writing, providing suggestions to the constitution, serving as an administrator, I’m happy to contribute.

How do you rate the women’s talent in the USA following the competitions in Philadelpia and Florida?

We have very talented players. It’s just a matter of providing the platform and infrastructure for the women to go to the next level.

Were there any new finds at the MCC matches or USA Nationals?

These events don’t really generate new finds. Players come into these tournaments already known by other players and/or administrators.

Male cricketers want to break world records across the three formats play in the wealthiest leagues what do female cricketers aspire to?

USACA tooted that there would be men and women contracts but to date we have only seen men’s contracts being released can you provide any insight?

I believe USACA will release information in due time.

American college cricket has been around for about 8 years attracting cricket playing students to American universities is there a space here for women’s cricket?

Definitely. This an avenue to expand cricket in the US. Currently, the NCAA no longer permits any new sports to be added for the men but for women, there is a chance it can be added as an emerging sport. It is a far more complex process but it is possible and it would be a great way to grow the sport in the US, and attract players from other countries to come here on cricket scholarships.

How important are locals to the American cricket infrastructure?

Locals are extremely important to any cricket infrastructure. Utilizing and empowering locals is the only way to build a sustainable foundation and for that reason, I believe investing in educating coaches, administrators, and other officials is key for the way forward.

We are at a very testing time in US cricket and regardless of what the year ahead holds, I’d like to see at least one thing happen. I’d like to see more people and organizations help one another to be successful. Success for any one entity helps all of us to be successful because we exist in the same ecosystem. Every positive contribution makes our entire ecosystem stronger.