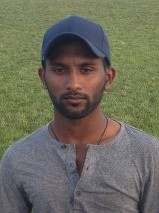 Staring down the tunnel following three consecutive losses Melbourne NY Alliance (MNYA) needed to turn back Somerset. Dubbed as the return fixture from a fortnight ago the stage was set at Canarsie Oval, arguably the best cricket ground in the city. Upon winning the toss Melbourne’s captain Troy Mars invited Somerset to take first strike. With seven consecutive weeks of torrential rains the conditions offered moisture to the seam bowlers. Carlos Bachu with his left medium fast continuously wrapped the pads of the openers with little bat coming into play. Even with a leg before decision seeming imminent, the initial dismissal came via the run out route, as Bachu wrapped the pads yet again with the ball rolling out to backward point with Roopnarine combining with Mars to find the prodding batsmen out of his crease.

Initially runs were hard to come  as Bachu picked up his scalp with Somerset Skipper Brian Cumebatch plumb in front. P Harris and J Rowe set about the repair job cashing in on some loose bowling by the change bowlers. A threatening third wicket partnership was cut short as Rowe (22) lobbed a short delivery from Ravello, with Bachu completing a single-handed leap at mid off to complete the dismissal. Harris took advantage of any short bowling from the medium pacers. Mars introduced spin to good effect as the twin of Rahimullah Shakoor and Zafar Yusuf dried up the runs in tandem. Yusuf was the more incisive of the pair as he maintained a procession from the middle to the bleachers, as he struck Harris (39) in front. Stefan Rampersaud took advantage of a mix-up between the sixth wicket pair to complete a run out with a direct hit from short mid wicket. Down the order Roger Larrier played cameo of 23 to stave a complete collapse. Again it was Yusuf with the final say as Larrier (23) drove, edging to slip where Shakoor completed a regulation catch. Somerset posted 152 in 33 overs, with Yusuf as the main destroyer with 8-0-23-4 he was supported by Bachu, Ravello, Shakoor and De Freitas with a wicket each.

Like Somerset Melbourne NY Alliance were slow in their approach with Shakoor and Yusuf partners at the top of the order as well. Shakoor (14) was the first to go, caught at backward point to a leading edge, Darrell Evelyn the bowler. Anthony Harewood scored two before Evelyn found his edge with Harris completing the catch at slip. In a bold move Bachu was promoted up the order combine with Yusuf for another fruitful partner which saw Melbourne Alliance to 51/1 after 15 overs. Bachu had done enough to improve his batting record before C Small had his man to a successful leg before decision. Yusuf continued to rotate the strike as he found his captain Mars as a capable partner.  Mars curbed his inhibition, relying less lusting hitting as Melbourne closed in on the score at 100. Yusuf (35) played solidly throughout his innings, until he began to attempt cross batted strokes. Playing across the line to Larrier, Yusuf had no reprieve this time to be dismissed leg before. Next in was De Freitas, struck in front of a golden duck, 100/5.

The match had now shaped to be Melbourne’s to lose rather than Somerset’s to win with the equation at 51 runs needed in 15 overs. Ravello joined Mars, as the pair mixed solid defense with quick running between the wickets to drive home the momentum. Mars added insult to injury as he whipped Larrier for two sixes over the mid wicket boundary. Ravello was no bystander as he took 7 off an over himself and even injured Evelyn who failed to hold on to a return catch as he was struck where it hurts the most. Evelyn completed his seventh over, but in grim-macing in pain he left the field to a nurse his wound. Larrier return for a tight over before Mars took apart Small with 15 runs coming in what was the final over. Melbourne Alliance completing the equalizer against Somerset with a comfortable five wicket victory. Mars unbeaten on 68 and Ravello still standing on 12, the win coming with 42 balls to spare. Evelyn 2/24 and Larrier 2/25 were the best efforts with the ball for Somerset.

Melbourne will look to build a momentum going into next weeks double header against MVP and Punjab both at Baisley Pond Cricket Park. Somerset will be off this coming weekend and resume play against Challengers on June 29th in the Mark Clarke Knockout Trophy. For full schedule click : https://vellocricket.files.wordpress.com/2013/06/acl-2013-cricket-season-fixtures.pdf